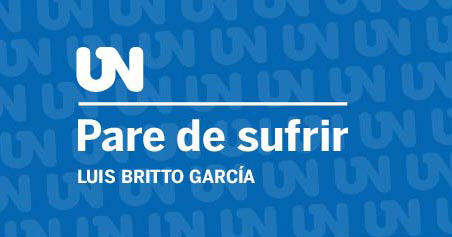 One hundred years of the USSR

And there, in the distance steppe
The Soviet Union raises its fist of hope
Comrade, cheers!
Achilles Nazoa

1
Thirty years ago, Aníbal Nazoa wrote: "Soon the world will understand the immense tragedy that the dissolution of the Soviet Union means." All the firewood that empires and news agencies have made from the fallen tree is not enough to make you forget it. That tragedy does not end nor do his wounds close. Let's try a precarious and perhaps provisional balance.

2
On November 7, 1917, the Bolshevik party, which would barely have more than 15.000 members, proclaimed the first socialist state in the largest country in the world: what was left of the retrograde, oligarchic, and disjointed tsarist empire, tyrannized since 1613 by the Romanov dynasty. To show that revolutions are not possible, the reactionary countries do the impossible. To declare a Revolution is to face an internal counterrevolution and an external war accompanied by a blockade. This has happened historically even against the bourgeois revolutions in England and France. This was also the case with the Soviet Revolution. From the first day of the seizure of power, fourteen imperial powers declared war on it. The United States invaded through Alaska, only to suffer a colossal fiasco. The broken tsarist army could not continue the fight, and the Bolsheviks had promised peace. In order to reach an agreement with the Central Powers of Germany, the Ottoman Empire, the Austro-Hungarian Empire and Bulgaria, the Soviet power had to cede to them on March 3, 1918 in the Treaty of Bretz Litovsk the territories of Estonia, Latvia, Lithuania and Poland and accept the independence of Finland, Georgia and the Ukraine, losses that he recovered months later with the surrender of Germany. The tsarist White Army, the rich landowners and the bourgeois reaction triggered the civil war. It seems that the rising power has only a few weeks to live.

3
However, on December 30, 1922, representatives of Russia, Byelorussia, Transcaucasia and Ukraine proclaimed the Union of Soviet Socialist Republics, in accordance with Lenin's plan to create a federative state made up of sovereign and independent republics, opposed to Stalin's project. , more centralist. The nascent Union was a Federal State in every sense of the word. Each of the Republics that comprised it had its own constitution, nationality and culture, and many of them had their own religion and language, as well as the constitutional right to practice and preserve them. Its integrating element was the plan to take heaven by storm with the earthly ladders of the cadre party, social ownership of the means of production, socialist planning, electrification and Soviets or Workers' Councils.

4
The backward and ruined country that was born from the rubble of the First World War and must suffer the greatest weight of the devastation of the Second, adopts autonomous economic development as a priority, without which it would become a colony or semi-colony of empires. Trotsky's thesis of promoting a Permanent Revolution that spreads like wildfire throughout the world does not seem feasible. In 1919 another Communist Revolution had broken out in Hungary, which was quickly crushed. The Stalinist proposal to concentrate on Socialism in one Country predominates. The Red Army commanded by Trotsky defeats the internal counterrevolution; the proletariat led by the Communist Party fulfills the collectivization of the countryside and the electrification of industry. Tsarism's average rate of industrial growth had been 3,2% per year between 1800 and 1810; by 1918 the harassed Soviet power had already raised it to 6,9%; by 1930 the planned economy has strengthened it up to 16,5%; from 1941 the destruction caused by the nazi-fascist aggression and its aftermath plummeted to 11,3% in 1954; since 1959 it has stabilized for a long time at 9,15%, one of the highest in the world. (Marc Saporta, Soria, Georges (1969) The Two Colossi: USA-USSR. Argos Editorial Bookstore, Barcelona. P.299) These rates of development remain stable, without suffering the economic crises of capitalism. Barely three decades after shutting down a medieval autocracy, the Soviet Union is the world's second largest power.

5
Despite bearing the main destructive burden of two world wars, social ownership of the means of production and state planning not only develop the economy: they produce nuclear devices in 1948; they launch the first artificial satellite in 1957; they put the first cosmonaut into orbit in 1961. That year they placed the first space probe on Venus, the next the first on Mars, in 1966 the first unmanned mission landed on the moon and transmitted from the satellite, and then the first manned space bases orbited. Science becomes a collective passion of the Soviet youth that fills the free universities: a city for research, Novosibirsk, is created. The USSR takes the lead among scientific and technological powers.

6
What central planning and collective work achieve in industry and in collectivized agriculture translates into rights for workers. Education at all levels and medical assistance are free, in a world where at that time they were reserved for the wealthy classes The right to vacations is recognized, first for fifteen days and then for a month, which was barely conceivable in the capitalist world. The USSR guarantees full employment, social security and decent retirement at age 55 for women and at 60 for men at a time when, thanks to the economic crises in capitalism, such rights were utopian (https://archivo.juventudes.org/nikolai-efimov/5-diferencias-entre-el-sistema-sovi%C3%A9tico-de-pensiones-y-el-sistema-capitalista). Equal opportunities and remuneration of women with men are guaranteed; the marriage can be dissolved at the request of either party; homosexuality and abortion are decriminalized; maternity leave has been granted since 1917, which eventually lasts for three years (https://sputniknews.lat > News). These rights are not only recognized but also fulfilled where possible in a country hard hit by the Czarist counterrevolution, the world wars and the endless blockade of the Cold War. Waste and consumerism are not implanted. The production is oriented to cover the fundamental needs of an austere and egalitarian life in a repeatedly destroyed and besieged country. This does not happen without errors, setbacks or setbacks, but the results are exemplary, and serve as a model for subsequent claims in the capitalist world.